Halloween Horror Nights has given us several memorable haunted houses based off of intellectual proprieties (IPs) over the last twenty-seven years.  The list of IPs has grown to include A Nightmare on Elm Street, Friday the 13th and The Evil Dead.  Each of these films are considered classics from the 1980’s and have immense cult-like devotion from their fans.  That being said, most people do not realize that these movies are connected due to a few cleverly placed props.

It all began with a poster

Once, Wes Crave saw, “The Evil Dead,” and heard why Sam Raimi placed  a, “Hills Have Eyes,” poster in the film he decided to play along.  Craven winked back at Raimi by including a scene in ,”A Nightmare on Elm Street,” where lead character Nancy is watching, “The Evil Dead,” on her television while trying to stay up.

If the glove fits

Loving the fact that Wes Craven referenced his film in, “A Nightmare on Elm Street,”  he decided to take it to the next level in the sequel, “Evil Dead 2: Dead by Dawn.”  This time around Raimi referenced, “A Nightmare on Elm Street” by including two scenes where Freddy’s glove is clearly seen hanging in the background. The first scene is when Ash goes into the woodshed and Freddy’s glove can be seen hanging over the door frame.  The final reference can be seen when Ash in wondering in the basement looking for the missing pages of the Necronomicon Ex-Moris, or the Book of the Dead.

A Book is only worth what it is printed on

After the dismal box-office results of, “Friday the 13th part 8: Jason Takes Manhattan,” Paramount Pictures sold the franchise rights to New Line Cinemas in 1990.  This lead to one of the weirdest entries in the Friday the 13th series, “Jason Goes to Hell: The Final Friday.”   In this film, Creighton Duke reads a spell from the Necronomicon, while another character stabs Jason with the Kandarian dagger.

The Ending or the Beginning everyone wanted

By now, everyone knows how, “Jason Goes to Hell: The Final Friday,” ends. Freddy’s glove comes out of the ground and crushes Jason’s mask. This was the ending that every fanboy wanted and it lead to the film, “Freddy vs. Jason.” However, with the inclusion of the Necronomicon and Kandarian dagger many fans wanted a sequel called, “Freddy vs. Jason vs. Ash.” The fanboys never did get this movie, but they instead got a limited six issue comic series published by Wildstorm and Dynamite Entertainment. This series ran from November 2007 until March 2008. 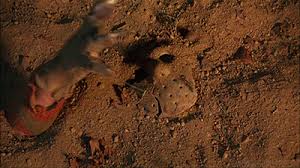 This could be the greatest house ever built…

This leads me to wonder why Halloween Horror Nights have not created a Freddy vs. Jason vs. Ash house yet?  I believe this would be an incredible house and the billing alone would draw in the fans.  Please Universal give us a mega house that combines scenes from all three franchises and climaxes with Ash breaking out his boom stick and  chainsaw to send Freddy and Jason back to Hell!

So, did you know all these facts? Are you still hoping for a Freddy vs. Jason vs. Ash movie? Do you think this would make a great HHN House?  Let us know!